It was a pre-COVID lifetime ago when our team gathered in July 2019 to watch Live! Casino & Hotel’s Executive Chef Ed Evans cook his heart out on The Food Network’s popular Chopped reality cooking show. This year, the follow-up gathering was virtual as we, along with Live!’s communications team, proudly accepted the Public Relation Society of America Maryland Chapter’s 2020 Best in Maryland Awards “Award of Excellence” for our media relations campaign to make that goal a reality.

The nearly two-year journey required a lot of persistence, planning and prowess. Here are three PR takeaways we learned from the Chopped experience, from the original pitch to executing—and extending—the promotional plan to elevate our client’s profile. We are immensely grateful to Live! for their full partnership throughout this endeavor. None of this would have been possible without their buy-in and support.

The initial rejection in 2017 was swift. A producer for the Food Network panned our idea of a themed episode featuring a competition among casino chefs.

Yes, we could have taken no for an answer, but you don’t give up that easy when you have a charismatic homegrown celebrity chef with a captivating story.

A LinkedIn message to a Chopped senior producer led to a referral to the casting director, who asked us to personally forward Chef Ed’s application.

One month later, Chef Ed met virtually with the Chopped casting team and explained the origins of his “Jay-Z of the Kitchen” moniker, how the culinary arts kept him motivated through a childhood of adversity in West Baltimore, and why he’s a big proponent of introducing kids from marginalized communities to global cuisine.

Welcome to Chopped! That was the subject line of an e-mail  Chef Ed received a few months later from the talent coordinator confirming an April 2018 episode shoot date. In fact, coordinate was the common theme at this stage. Travel arrangements. A pre-production visit from Chopped to gather property b-roll and interviews. And, of course, plenty of practice sessions in Live!’s professional kitchen to simulate the show’s frenetic, cutthroat and down-to-the wire pace. We threw the kitchen sink at Chef with a cornucopia of wild and wacky ingredients. Squid ink pasta. Gummy bears. Bone marrow. Surely the actual competition would be nothing compared to these mock competitions. And then April arrived. As Chef Ed competed his heart out in the Chopped kitchen, our team started outlining the promotion plan for when we could eventually go public with his appearance. Ultimately, Chef Ed made it to the dessert round before he was chopped in what the judges said was a neck-and-neck competition. But there was no need to water down the promotional plan. After all, the silver lining of being the runner-up was that Chef would get the same amount of screen time as the Chopped champion. Win or lose, Chef Ed’s captivating story still needed to be told. Waiting is the Hardest Part

“I can’t take kids around the world on a plane but I can certainly do that on a plate.”

The first thing we did after returning from Manhattan to Maryland was finalize the promotional plan. From a PR perspective, there’s nothing new about a local chef appearing on a national food competition. Our plan was to extend Chef’s stardom based on his answer to the quintessential contestant question – what would you do with the $10,000 grand prize? Chef told the judges he would put that money toward an unforgettable culinary experience for kids in underserved Baltimore neighborhoods as a way to give back and inspire the next generation. “I can’t take kids around the world on a plane but I can certainly do that on a plate,” Chef Ed told the judges.

We didn’t have much time to waste, based on the July 4th-themed ingredients Chef worked with (Patriotic Pasta, Ketchup & Mustard Cake, a watermelon keg) and Independence Day was only a few months away. Fortunately, the episode aired the following year in early July 2019. Some sleuthing from our team based on upcoming online episode descriptions confirmed Chef Ed’s episode date a few weeks ahead of time. The morning after Chef Ed came up one dessert short, we announced that Live! Casino & Hotel would donate the $10k grand prize equivalent on Chef’s behalf to the Y of Central Maryland—where Chef serves on the board—to make his Around the World on a Plate event a reality.

That’s the type of story that would pique a reporter’s interest. Yes, we got the standard news cycle of announcing Chef Ed’s upcoming Chopped appearance followed by the competition results. But this post-Chopped event—where Chef and his international culinary team prepared and served dishes from their home countries—was a strategic way to extend the shelf life of Chef Ed’s feel-good story and drive home Live!’s ongoing commitment to local philanthropy and community outreach. In all, our team secured nearly 60 placements and media mentions for the Chopped & ‘Around the World’ news cycle. 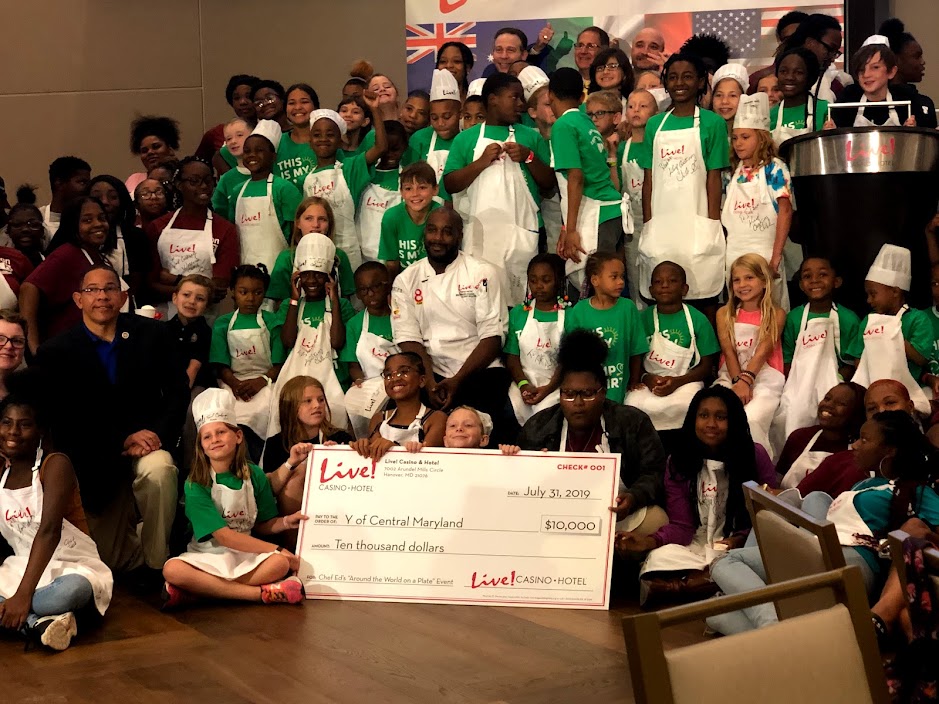 From Pitch to Placement

The entire experience started with an innocuous question from our agency president, who is always challenging us to think outside the box for our clients: What do you think about getting Chef Ed on Chopped? In total, it took nearly two years between the initial pitch to watching Chef make his national culinary debut. Getting the chance to compete on a grand stage is no small feat,  but when you have the privilege to work alongside someone as dedicated as Chef Ed, you’ll leave no stone unturned to tell their story. And when you get that chance, you’ll run with it. Just, not while holding a chef’s knife.