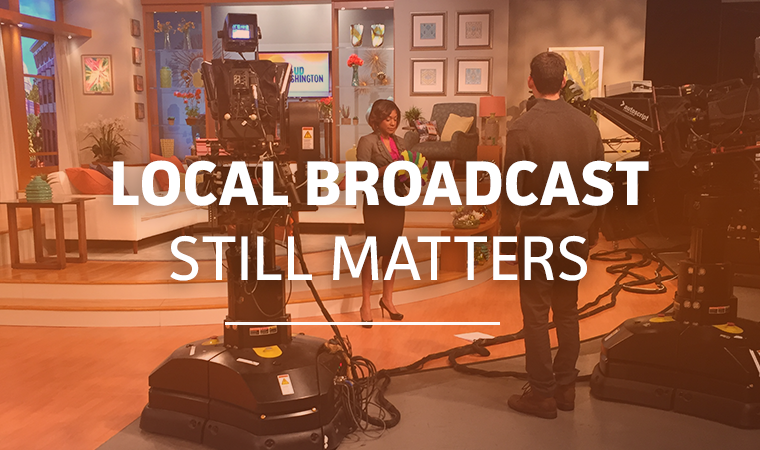 I’ve come to (loosely) consider myself a connoisseur of the local broadcast game. Over the past few months, I’ve provided support to the Maryland Office of Tourism on multiple broadcast segments. From promoting craft beer with events in “FeBREWary” to the races at Preakness, there has been no shortage of cheerful, light-hearted segments to grace viewers’ eyes.

Some segments have been as simple as securing the date and handing off the reins to the client. Others involved orchestrating the full gamut of media support — brainstorming ideas, writing attention-grabbing talking points, delivering a media training to the spokesperson prior to the segment, and providing on-site support.

I’ve often come away from these engagements awestruck by the immense preparation involved in each of these live segments: the producers, the technicians, the lights, the hosts, the guests, and of course, the high-tech cameras that move eerily around the set capturing every angle. It leaves one with the impression that there are hundreds of thousands of viewers watching intently from their couches.

As it turns out, many people are still watching local broadcast, regardless of the headlines we often see declaring its demise. According to the Pew Research Center, there is a slight increase in viewership for early evening and morning news — a 6 percent boost from the previous year. However small the increase, more people are tuning in.

Data supports the notion that local broadcast is still an important platform for both traditional and paid media alike. Here are a few reasons why I think audiences are still tuning in, and even growing, at a time of intense competition from new media:

Newspapers are churning out new stories every second, but more often than not the average consumer isn’t concerned about everything at a national level every second of the day. Local broadcast provides updates to viewers on news in the community, something that is still important for average viewers. Although news such as national elections affects all citizens, news at a local level is highly relevant.

During a time when many individuals crave the need to share everything, whether it’s funny, relatable, or awareness-driven, people are sharing content that they find important. Social media has blessed broadcast networks with the ability to post content and have it live forever (or for a few weeks at least). By generating content that hones in on what the local viewer cares about, local stations can receive more views just by making it accessible on their social pages. By engaging with their audience online, local stations are extending their networks beyond television viewers.

Through local station broadcasts, communities can come together for situations like missing person reports or spend time getting to know one another at events such as the Moco Strawberry Festival. Through social sharing, community members can update others as well as contribute comments about what is happening locally.

It’s easy to get caught up in the whirlwind of national and international news, but local stations are keeping people up-to-date on matters in their own community. As broadcast continues to evolve with the changing media landscape, the medium can guarantee it will continue to remain a key component to keeping citizens informed.