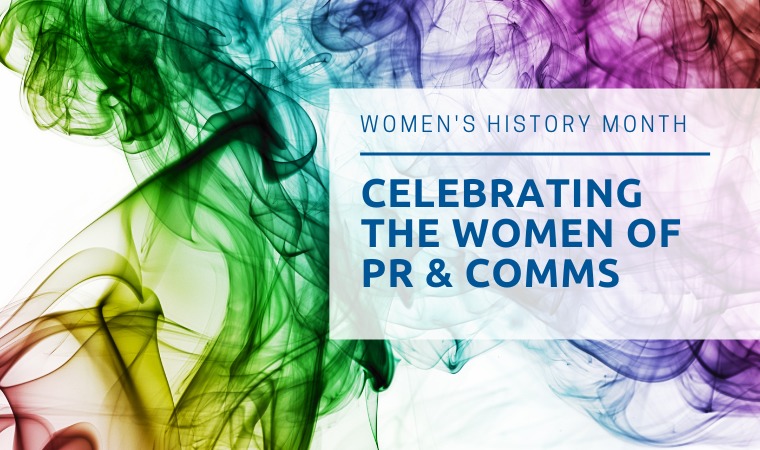 Women’s History Month is a time to uplift, empower, and acknowledge the intersectionality of all women worldwide for their contributions to our society. Our own field of public relations has many to celebrate!

From Malala Yousafzai to Fatou B. Barry, women have played an integral role in inspiring the present and future of PR and communications. Here, our team recognizes a few who have inspired us.

In the world of journalism, specifically Silicon Valley reportage, few names carry the gravitas of Kara Swisher. As an openly gay woman in her late 50s covering the male-dominated tech industry, Swisher has gained enormous respect for her unflinching coverage of the companies and personalities shaping the sector. In a field that is widely understood to foster a “bro culture” that minimizes the contributions of women, her rise to prominence is no small feat.

Swisher originally sought a career in the U.S. military, but the Clinton administration’s “Don’t Ask, Don’t Tell” policy steered her away from that calling. As she told PBS News Hour, “I wanted to tell. I wanted to be asked.” She turned instead to journalism, deciding in the early 1990s that she would write full-time about the Internet, which at the time was in its infancy. That path led her to where she is today, a reporter and opinion writer whose “journalism makes Silicon Valley tremble.”

Her fearlessness is inspiring. She demands to be seen for who she is and is willing to sacrifice for it. She pursues truth and holds the most powerful people in tech accountable. She is, indeed, a force.

“…let us pick up our books and pens. They are our most powerful weapons.”

Malala Yousafzai is not a communications professional, but she is an incredibly effective and inspiring communicator. The speech she delivered to the United Nations on her 16th birthday was a powerful lesson in storytelling. She used her personal suffering to drive the global dialogue around gender equality and access to education. She never wavers from her message and continues to find unique ways to deliver it 10 years after she was attacked by the Taliban, most recently via Apple’s Time to Walk app. Malala is passionate. She is sincere. And she is a teacher to us all in so many ways.

It’s impossible not to love Laverne Cox for her charisma and humor on-screen. More than any other field, communications professionals should be able to appreciate the power of storytelling as a way to raise questions, change hearts and make a positive difference. This is something Cox does by showing up loud and clear as her authentic self in every role she takes on.

But Cox doesn’t stop there. She works even harder off-screen as an activist, lending her energy and platform to issues including advocating on behalf of trans women of color and the LGBTQGIA+ community. Through both roles, Cox demonstrates powerful communications skills and authenticity I find admirable and worth emulating.

Founder of Fair Fight, political leader, and lawyer Stacey Abrams may not be a public relations pro, but the way she advocated for the crucial issue of voter rights—to the extent of becoming the de facto face for the cause—demonstrates she has all the savvy of one. Her ability to advocate and unite inspires me.

And her political career isn’t the only way she’s been groundbreaking—with her genre-blended romance novels, she has been bringing important (and generally still lacking) BIPOC representation to genre fiction for over a decade with exciting and heartwarming stories. If a great communicator is measured by their capacity to connect with people across a wide range of channels and methods and motivate change, Abrams might be one of the greatest of our age, altering the world for the good with every move she makes.

While not public relations professionals, women in business who have steadfastly served as my inspiration are my mother, Barbra Corcoran and Suze Orman. To date, my mother (now retired) remains one of two female CEOs/owners in the United States of a large manufacturing enterprise; Barbra Corcoran, real estate titan and founder of The Corcoran Group; and Suze Orman, financial powerhouse.  Across manufacturing, real estate and finance, these women unapologetically dominated industries that are historically male spaces. The growth of their companies and brands are testaments to their leadership, intelligence, and determination.

While public relations heavily dominated by women in support positions (the 2021 World PR Report states that women constitute 60-85 percent of all PR jobs globally), only 30 percent of PR agencies are managed by women…there is still work to be done. As I continue in my career, I am grateful for the example that they set for all women in business.

As a woman in the PR industry, I find Muriel Fox to be a particular source of inspiration as I navigate my career. Fox co-founded the National Organization for Women (NOW) in 1966 and led their public relations efforts. Besides drafting and distributing the first ever press release for NOW, she also led their campaign, which convinced President Lyndon Johnson to add women to the Executive Order that established non-discriminatory practices for hiring and employment, which in turn, made it illegal to not hire someone because of their gender. Since 1993, Fox has served as the Chair of the Board of Veteran Feminists of America. Without her dedication to equality, trailblazing mentality, and inner strength, it is very possible that I would not have the opportunities that I have today. It is because of women like Muriel Fox that I am committed to achieving every success possible, due to the sacrifices and commitment they had, to make this career a possibility for women today.

Please resist the urge to roll your eyes when you read about another millennial finding inspiration from Instagram. It was there that I found PR Girl Manifesto, a community of young women in public relations and communications working together to create a more equitable and inclusive industry. Fatou B. Barry founded that community “after several shared experiences of ageism, sexism, and racism in the industry.” Since its inception in 2014, PR Girl Manifesto has grown into a non-profit organization that offers PR fellowship and mentoring programs for young women across all backgrounds. Additionally, Barry has played a founding role in the formation of media, networking, and advocacy groups. It is individuals like Barry that recognize the obstacles and barriers they have faced and choose to build tools for all women to overcome them.

I have always loved fierce, intelligent female characters in TV or movies that are based off real-life people and events. One of them you may know, or you may not. Judy Smith is a world-renowned crisis manager, lawyer, author, and television producer, and is known as the inspiration behind the beloved “Olivia Pope” from the hit TV show Scandal.

Having served under George H.W Bush as deputy press secretary, Smith has also represented a portfolio of high-profile people, celebrities and other politicians. She serves as an example of a powerful woman who has had an incredible career with a broad range of clients and projects. Smith’s deep understanding of communication and human condition, which no doubt have contributed to her success, shows in a quote that I came across from her about crisis management: “The root causes of most crises often lie in an imbalance in one of seven traits: Ego, Denial, Fear, Ambition, Accommodation, Patience, and Indulgence.”

Betsy Plank, also commonly known as the “First Lady of Public Relations,” had a career filled with many firsts. I find Plank to be a strong career-driven woman to look up to as I find my own way in the PR industry. Throughout her career, Plank held leadership positions that were then only a dream for many women. She served as the executive vice president for Daniel J. Edelman, Inc., now known as Edelman Public Relations; she became the director of public relations planning for AT&T; and following that, became the head of staff at the Illinois Bell, now SBC Communications. Plank became recognized as a force to be reckoned with in the PR industry.

One of Plank’s most notable career accomplishments is helping create the Public Relations Student Society of America (PRSSA). PRSSA helps students advance their knowledge of public relations and network with public relations professionals. As a college student, I was a member of the PRSSA, and I learned valuable skills that have helped shape me into the professional I am today. Because of fearless women like Plank, I know I have incredible opportunity ahead in my career like leading a PR agency, as well as to pass it forward by supporting other aspiring PR professionals.

Black women have been the most underrepresented in the public relations (PR) field for as long as it has existed. However, an important figure paved the way for many Black women PR professionals who aspire to run their firm and agency one day. This month, I pay homage to Inez Yeargan Kaiser, the first Black woman to own a PR and advertising company. Before taking the initiative to start a PR firm, Kaiser spent 20 years of her life as an educator. She has made it possible for Black women in the PR industry to thrive in our work. Kaiser’s story inspires me because I am reminded that if she can have her own firm as a Black woman, so can I.

I wish to recognize and say “Thank You” to three outstanding women without whom I simply would not have a career in this field. They are my first three bosses in communication.

Linda Schulte was head of communication for the Maryland Energy Policy Office during the oil embargoes of the early ‘70s. She brought me on as an intern and kept me around – for some reason  -once the internship ended. She taught me core principles of media relations, but more important, communication integrity, honesty and transparency long before such “core values” were fashionable.

Louise White was head of communication for the University of Maryland’s Baltimore City campus. This was the medical professional school campus of the university. Unimaginable breakthroughs in science, cancer therapy and medical research occurred on that campus and Louise had the insight and imagination to capitalize on these and put the school on the global stage. Louise convened a press conference to announce a world‘s first cancer therapy. It was attended by more than 80 journalists all demanding one-on-one interviews with the patient and the physicians.  I observed Louise in action and learned from her how to say no, but still get the coverage.

Jean Rainey was head of the Washington, DC office of what today is MSL/Publicis.  She gave me my first agency job and the opportunity to work on the business of major corporations, industry associations and professional societies.  She was demanding and hard knocks, but still kind and caring.  She also provided access to many other of the brilliant professionals that populated that firm in those days. Jean provided an enriching experience that remains with me today. I hope I do as much in support of my own people as an ongoing tribute to Jean.

I learned everything from these pros before I ever had a male boss in this field.  These women were proving their value and talent every day. They were women at the peak of their capacities who created opportunities for others regardless of gender.

Thank you to all these inspiring women.